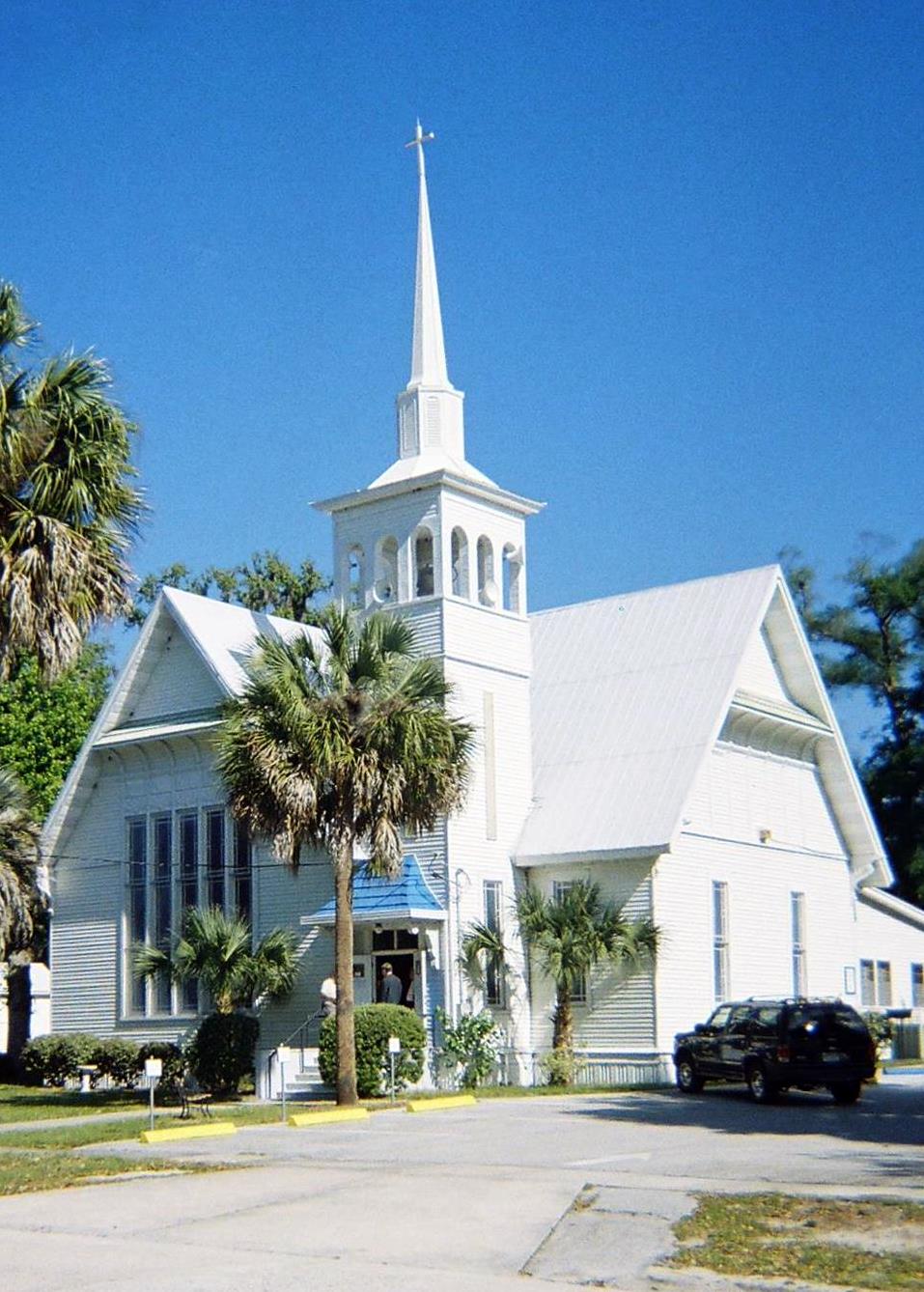 The Congregational Church was the Church of the pilgrims at Plymouth. The Evangelical and Reformed Church was formed by the wave of German immigrants that came to the United States in the mid-1700s and 1800s. Both had a long and illustrious history.

Though affiliated with the United Church of Christ, our local church is made up of members from various denominations.  We come together from all walks of life and many of us are from several different states. Most of our members, friends, and attendees are not originally from a UCC background.

At First Congregational Church of Orange City, you will find an extravagant welcome and diversified people.  We are a community of faith that seeks to respond to the Gospel of Jesus Christ in concrete and meaningful ways without judgment or discrimination. Jesus didn’t discriminate and neither do we!

So, no matter who you are or where you are on life’s journey, you are welcome at First Congregational Church Orange City! 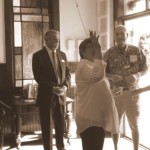 A group of 12 people formed First Congregational Church in 1883. The building spans the 19th through 21st centuries with its old fashioned, southern style clapboard walls, high pitched ceiling, stained glass, and a bell tower with a tall steeple.

The church was built on its present site by George Parker, who used oak blocks brought in from New Smyrna Beach for piers. The oak blocks were later replaced with termite-proof brick columns.

Early members could sit and listen to a sermon and inhale the sweet scent of orange blossoms because the church was built amid the town’s 170-180 orange groves which filled 4,000 acres. The panels on the lower walls were made from orange crates.

The original church building was lighted by a single chandelier in the center of the sanctuary containing 12 kerosene lamps. There were other lamps in the northwest corner near the pump organ. All these lamps had to be washed and refilled twice a week using a 10-foot ladder. 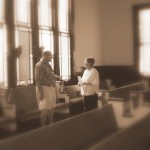 It is believed that the lovely Buell-Hooker stained glass window was installed in 1924.

In 1924, Miss Mary Morse bought the pipe organ that was in Rollins College and gave it to the church in memory of her 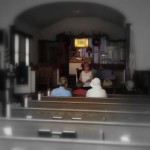 parents. Mrs. Jane Murray gave money to build the addition to provide room for the organ.

In 1951 Mrs. Murray presented a gift of $2,000 toward the building of a hall. When the building was completed and dedicated it was named Jane Murray Hall. It now houses the church’s offices as well as a children’s church schoolroom, choir room, and multi-purpose room. Jane Murray Hall is home to the Village Improvement Association of Orange City Women’s Club, AA, and other groups.

In November 1980 Bernard A. Bock presented the church with a lovely stained glass window depicting the Alpha and Omega symbols, which was installed over the altar in the chancel of the church. This window was handcrafted by him and given in memory of his father. 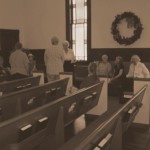 The east wing or annex of the church was dedicated on January 24, 1924, and became known as the Sunday School Annex. The room was often used for church suppers as well. The double doors led into the kitchen, which was used as the church library in recent years and as a lounge.

In February 1962, the congregation decided to purchase the house and lot west of the parsonage. A building committee was approved in 1991 and after five years of planning and fundraising, a Fellowship Hall was completed on October 13, 1994.

Today Fellowship Hall is a Meals on Wheels congregant dining site Monday through Friday from 9 a.m. until 1 p.m. It is also used by the West Volusia Club and several AA groups.

A meeting was held in the church on January 29, 1885, for the purpose of organizing Rollins College, which was to be the first institution of higher education established in Florida. Representatives from various Congregational churches in Florida traveled by mule-drawn wagons to Sanford, and then took a boat to Blue Springs and on to Orange City by tram cars that ran on wooden rails and were pulled by mules. Twenty-four people attended the meeting, and after lengthy discussions, voted to build Rollins College in Winter Park. A plaque was unveiled in January 1935 by Jane Murray, who donated it in commemoration of the 50th anniversary of Rollins College.

February 28, 1883: The First Congregational Church of Orange City, Florida was organized in the Methodist Church. The Reverend J. C. Cromack was the organizing pastor.

March 22, 1883: The Ladies Aid, now known as the Women’s Fellowship. was organized before the church was officially incorporated.

Latter Part of 1883: A church was built on the present site by George Parker, who used oak blocks brought in from New Smyrna Beach for piers, later the blocks were replaced with bricks.

December 13, 1883: According to the official records of Volusia County, Florida, twelve persons met to give notice of their intent to organize a Congregational Church.

December 27, 1883: A meeting was held to approve a Constitution and By-Laws. The name of the church was to be “The First Congregational Church of Orange City”. The proceedings of the meeting were recorded in the  Public Records of Volusia County, Florida, Deed Book N, pages 604 through 606.

March 1884: The annual meeting of the state conference of the denomination was held in Jacksonville with Dr. Barrows representing the Orange City Church.

July 29, 1884: The Women’s Missionary Society of the church was formed and the meetings were held in various members’ homes. Money collected was sent to Ybor City Mission in Tampa and to the mountain people in the Carolinas. Clothing which was donated also was sent to these places.

January 27, 1885: The Second Annual Meeting of the State Conference was held in Orange City. The Sessions were held in the City Hall and were represented by S. V. McDuffy, pastor of the church in Orange City.

January 29, 1885: A meeting was held in the church for the purpose of organizing Rollins College, which was to be the first institution of higher education to be established in Florida. People from Winter Park traveled by mule-drawn wagons to Sanford and then took a boat to Blue Springs and on to Orange City by tram cars that ran on wooden rails and pulled by a mule. Twenty-four people attended the meeting, after lengthy discussions, it was voted to build Rollins College in Winter Park.

1908: The parsonage was built at the cost of $1,325.00. When it was completed, a special event was held to celebrate the burning of the mortgage. Today the building houses the Thrift Shop.

1909 -1921: It was during these years that the church experienced interest and growth. Programs were added and improvements were made to the buildings located on the campus.

1922: Construction of the East Wing or Annex to the church building began.  Reverend Staub was pastor at this time.

January 24, 1924: There was a celebration to dedicate the new East Wing/Annex of the church which was used as a Sunday School. Many of the members made contributions toward the project. There was a set of double doors that acted as separation as the room was used for church suppers. The doors led into the kitchen which is now the church lounge/library.

1924: Ms. Mary Morse bought the pipe organ that was in Rollins College and donated it to the church in memory of her parents.  Jane Murray gave money to build the addition to provide room for the organ. It is believed it was at this time the lovely Buell-Hooker stained glass window was installed.

1933: Reverend Gordon Brokenshire is the pastor and the membership votes to organize and celebrate the church’s 50th Anniversary. The ladies of the Methodist Church serve an anniversary supper in the Dickinson Library. Letters from former pastors are entered into the church records. The majority of former pastors were unable to attend due to ill health or travel restrictions. A youth rally was held for three days and members entertain guests in their homes.

January 9, 1951: Reverend Willis K. Williams founded the Meridian Club. Originally known as the couples club, it was created as a church social club as a way in which people could get to know one another. Meetings consisted of pot-luck meals and programs of interest.

May 27, 1951: Mrs. Jane Murray presented a gift of $2,000 for the purpose of constructing a fellowship hall.  On November 18, 1951, the building was completed including furnishings and dedicated as Jane Murray Hall

1957: Denominational changes were made within the Congregational Church. We joined the Evangelical and Reformed Church. Today we are known as the United Church of Christ. (UCC)

1959: Plans are approved at the Annual Meeting to authorize a financial drive to enlarge Jane Murray Hall to accommodate classrooms for a growing Sunday school.

March 1960: A set of electronic chimes were installed in the organ. Later in the year, Hurricane Donna hits Orange City causing damage to the belfry.

February 12, 1962: The church decides to purchase the house and a lot west of the parsonage (aka the thrift shop). The cost was $6,000. In April the transaction is completed.

May 1967:  New pews are installed in the sanctuary.

March 3, 1968: A dinner celebrating the 85th anniversary of the church was held in Jane Murray Hall.

February 8, 1970: Reverend Herbert M. Worthley was installed during the morning worship. In the evening a dinner was held to honor the new pastor and his wife, Beth.

Allan Gray gifted an organ in memory of his parents and a dedication service was held on May 10th.

November 1971: There was a fire in the chancel of the church causing a considerable amount of damage.

September 1973: Reverend Edward Hayes of Stonington, Connecticut answered the call to become the pastor. A new communion set was given by Beth Worthley in memory of her husband the late Reverend Herbert Worthley.

September 1977: The members welcomed Reverend Charles Fix as the church’s next pastor along with his wife Irma. A Sunday afternoon reception was hosted by the Women’s Fellowship to welcome them.

1979: Aluminum siding was installed on the exterior of the church and plexiglass was added to protect the stained glass windows.

1980: Donations from various members and a legacy from the Ralph M. Wright estate were given which made it possible tor the complete renovation of Jane Murray Hall.

In November, Bernard A. Bock handcrafted a stain glass window depicting the Alpha & Omega symbols. The window was installed over the altar in the chancel. This beautiful gift was given in memory of Bernard’s father.

Summer 1981: Services were held in Jane Murray Hall while the interior of the sanctuary was renovated.  Improvements included a new ceiling, painting, and carpeting.

1982: In 1930 the steeple was destroyed by a lightning strike. Gifts from the Memorial Committee and the Building Preservation Fund made a replacement possible.

1985: Reverend Robert McWaid accepts a call to become the pastor. He and his wife, Joanne arrive from Connecticut. Pastor McWaid’s installation service was held on December 15th at 3 PM, followed by a light lunch hosted by the Women’s Fellowship.

1987 – 1990: During this period, the church continues it’s growth. Many programs are added. With a membership of 240, the church outgrows Jane Murray Hall.

1991: With the need for more space, a building committee was approved and chaired by Joseph Kolb. The Budget was set at $100,000 with a groundbreaking goal of 1994.

1999: Reverend Robert McWaid resigned in May. A Vespers Service and dinner was held in October in his honor. Reverend James Riley accepted the call to serve as pastor. He resigned in 2003.

2003: Reverend James Martin answered a call to serve as a supply pastor.

March 2005: Frank Hoglen was hired as a part-time student pastor to start a non-traditional service as an outreach to the youth in the community.

February 24, 2008: In preparation for the 125th anniversary, the sanctuary underwent extensive renovation. Sunday services were celebrated in Fellowship Hall while the updating was in progress.